about the founder / pastor

Bishop Melvin A. Jenkins , Ed.D. was born and raised in suburban Philadelphia, PA and from an early age took a strong interest in the church and gospel music. Before he completed high school, Dr. Jenkins was an active musician and was involved with a number of local gospel groups.

During his pursuit of a B.A. degree in Liberal Arts at Penn State, Dr. Jenkins received the Call to the Ministry. He was later ordained and eventually promoted to Assistant Pastor of Unity Church of Jesus Christ in State College, PA. Some years later, the Lord moved the Jenkins family to Indiana University of Pennsylvania (IUP) where they both received Masters degrees. It was there they founded the IUP Voices of Joy gospel choir in 1988 and Victory Christian Assembly in 1990. Dr. Jenkins earned a doctorate in Developmental Education from Grambling State University in 2002, and is currently a professor and department chair at IUP.

Victory Christian Assembly has grown steadily since its inception. In addition to the “home” church in Indiana, PA, the Lord has birthed two additional ministries from Victory: New Beginnings Christian Fellowship in Punxsutawney, PA and Impact Fellowship on the campus of Penn State Harrisburg, PA. In recognition of the Grace and Calling on his life, Dr. Jenkins was promoted to the office of Bishop in 2013, under Fountain of Life International Fellowship led by Dr. Gerald Loyd. Bishop Jenkins feels inspired to start several more college based ministries over the next few years, as the Lord has given him tremendous grace in this area of church planting. “PJ” and “Miss Lael” (as they are affectionately known to many) also travel extensively, sharing the Gospel of Jesus Christ and His AGAPE love. The Lord has given PJ tremendous insight into the Word, and a unique style that make his sermons practical and enlightening. Miss Lael has been blessed with an ability to counsel and nurture young women in the ways of the Lord.

The Jenkins’ have been married since 1977, and have been blessed with children and grandchildren – both spiritual and natural. 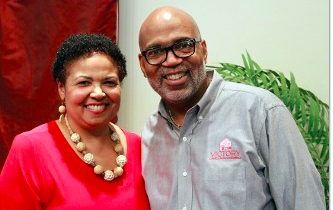